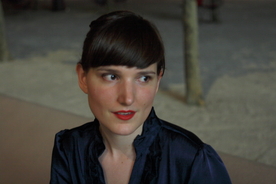 Sara Banleigh is a writer of original folk and country tunes, and her songwriting style is influenced by writers of all kinds, from Hank Williams, Neil Young and Joni Mitchell to Chekhov and Zola. Her songs deal with friendships won and lost, the wicked passage of time, and the devastation of true love.  Sara Banleigh is also a singer of spooky 500-year-old folk songs from the British Isles. Finding material in old folk books, scratchy records, early broadsides, and even contemporary folk albums, she lets songs creep into her subconscious where they brew and bubble and start to form roots in her soul. She may sing them softly to herself for years before arranging them for piano and playing them for interested listeners. She hopes you are one of them.

One of the few native Brooklynites on the music scene today, Sara traces her interest in great songwriting to her early exposure to old country music. In a time and place where there was  one crackly country station leaking in over the radio from the hinterlands beyond NYC, Sara remembers her Dad driving down Brooklyn’s Shore Parkway, blasting Hank Williams, Loretta Lynn, and Johnny Cash from his collection of old country tapes.

This early acquaintance with classic country led her to uncover artists on her own, such as Linda Ronstadt, Dolly Parton, and J.D. Souther, all of whom drew from the rich tradition of Appalachian folk music. From there, Sara started tracing the roots of the Appalachian ballads and up-tempos back to their origins, and discovered the great wealth and beauty of the Irish and British folk tradition.  This tradition continues to be heard in her original songs.

Sara’s musical influences are drawn from the pioneers and legends of old country music, the printed pages of forgotten folk books, and the modern albums of influential Irish and Scottish folk artists such as Planxty, the Bothy Band, and Rebecca Pidgeon. Her arrangements of these timeless songs and her original works bring the listener into a world of storytelling that is whole and enveloping.